“De nigger woman is de mule uh de world so fur as Ah can see,” opines Janie Crawford, the protagonist of Zora Neal Hurston’s Their Eyes Were Watching God.  While Janie’s statement is a generalization, it does convey the strength and resilience of many black women in the face of adversity.  Carol Ann Duffy’s title, The World’s Wife, builds off of a similar theme.  Mules and wives have frequently been reduced to “beasts” of burden.  Shakespeare puns off of the “bearing” of mules and women in The Taming of the Shrew in this exchange between Katharina and Petruchio:

Asses are made to bear, and so are you.

Women are made to bear, and so are you. 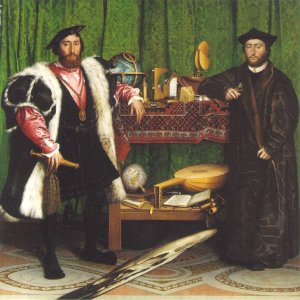 If women are made to bear, then at very least Duffy wishes to give them voice.  Her The World’s Wife is a collection of thirty dramatic monologues, in which women from history or folklore, or women married to famous men, provide their own accounts of events.

The purpose of these monologues is to have the reader re-examine characters or stories in a new light.  Consequently, these poems render anamorphic stories we thought we knew.  From this new perspective we learn that Little Red-Cap is NOT the victim of the wolf, Pygmalion’s bride comes to life and responds to his

caresses to get rid of him, Freud’s wife has penis pity instead of penis envy, and Queen Herod becomes the catalyst for the slaughter of the innocents because the three Queens, presumably on their way with their husbands to visit the newly born Jesus, tell her to watch for a star revealing the location of

The Boy Next Door.  The Paramour.  The Je t’adore.

The Wolf. The Rip. The Rake. The Rat.

The Heartbreaker.  The Ladykiller.  Mr Right.

who will break her daughter’s heart.

Each of these poems subverts the power structures of the original stories from which they are derived.  Thus, Little Red-Cap is no longer the passive victim of the wolf’s trickery; she has agency of her own, and makes “quite sure [that] he spotted me, / sweet sixteen, never been, babe, waif, and bought me a drink, / my first.”  The wolf may think that he, and his command of poetry, have control over the “waif”, but she is in charge and uses her time in apprenticeship to the wolf.  Ultimately, no woodsman is required to save this young woman – she’s never been lost, and she takes an axe to the wolf, “as he slept, one chop, scrotum to throat,” not to escape him but to see what’s inside him.

In some of the poems, Duffy switches the sexes of the characters, as in the case where King Kong is re-imagined as Queen Kong, and the helpless female “victim” is replaced by a willing male “partner”.  Removed from the story is any threat of violence, sexual or otherwise.  Queen Kong merely thinks that she can “swat his plane from these skies like a gnat,” without actually doing so, and her trip to New York to retrieve her paramour, far from involving the violence of the movie, turns into a shopping spree for “clothes for my man, mainly, / but one or two treats for myself from Bloomingdale’s.”  The biggest change, however, is the ending of the story – Queen Kong and her lover have “Twelve happy years,” and he dies peacefully, in stark contrast to the violent death of King Kong.

Part of what Duffy is doing, of course, is subverting the racist and sexist coding of the original movie.  A number of critics have suggested that the 1933 movie, King Kong, played into white fears of miscegenation.  The massively strong ape becomes a stand in for the “threatening” black man.  The trip to King Kong’s island by the “filmmaker” is a nod towards imperialist expeditions to “exotic” and “savage” locals.  The ape’s fascination with the white, blonde woman is another iteration of the worn-out literary and cinematic trope of hypersexualized black males seducing and / or assaulting white women.  For a more explicit presentation of that trope one need look no further than D. W. Griffith’s 1915 movie, Birth of a Nation.  In the case of King Kong, the entire military and police apparatus of the white state is brought against the black “menace,” and the woman is “saved” by the death of the monster.

While Duffy explicitly “others” her Queen Kong, she makes clear that a mutually satisfying relationship is possible.  Queen Kong may have come in pursuit of her lover, but he has a “blown-up photograph” of her over his head.  However unusual Queen Kong’s relationship with her paramour might be, she, and the reader, don’t doubt that “no man / has been loved more”

Before concluding I want to point out that Duffy employs a variety of poetic forms, meters and rhyme schemes.  For example, her poem “Anne Hathaway” is written as a sonnet, which, of course, is appropriate for the wife of Shakespeare, who popularized that form in the English language.  At the same time, Duffy, makes the poem uniquely Hathaway’s by having her adhere to iambic pentameter in the meter but eschew Shakespeare’s rhyme scheme (abab cdcd efef) for the three quatrains.  The volta, however, follows Shakespeare’s pattern by being a rhyming couplet that moves the speaker from a discussion of her and Shakespeare’s bed and love life, to his death:  “I hold him in the casket of my widow’s head / as he held me upon that next best bed”.

For a better discussion of these poems, visit this link:

I am an English professor with expertise in medieval and modern retellings of the stories of King Arthur. I have taught high school, college, and university courses over a a range of topics including Utopian and Dystopian fiction, Harry Potter, Science Fiction and Fantasy literature. View all posts by mdamey